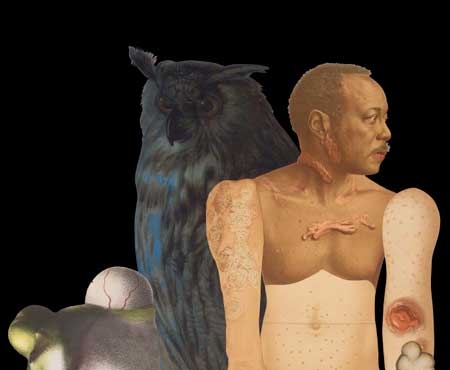 THE CONUNDRUM OF IMAGINATION
On the paradigm of exploration and discovery

INES DOUJAK, Skins | 2016 © Foto | Photo: Ines Doujak
A performative exhibition of the Wiener Festwochen in cooperation with the Leopold Museum
The Conundrum of Imagination exhibition project that scrutinizes the European Age of Exploration looking at the 3 Gs that were core to such enterprises: Gold, God and Glory. The project delves into the human psyche and the predicaments that our minds set us up in when the “conundrum of the imagination dictates, discovers, or can dismember what we feel, or what we find,” as is the case with the concept of exploration. The exhibition situates itself in our contemporary by looking at the impact and echoes of the Age of Exploration in the world today, but also by analysing expanded forms of exploration, and the rhetoric thereof e.g. internet explorer.