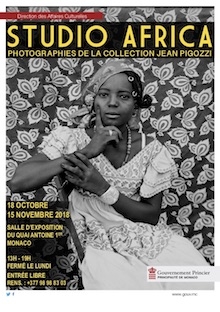 Photographic studios in West and Central Africa
With the exception of a few rare archives dating from the 18th century, the production of images of West and Central Africa developed above all during the 1940s. However, it remained under the control and censorship of the colonial powers and the work of local photographers was limited to portraiture, like that of Seydou Keïta, Mountaga Dembelé and Cornélius Augustt Azaglo. It was necessary to wait for the achievement of independence at the start of the 1960s and the arrival of more easily handled cameras for African photographers to leave their studios and capture the life of their countries and the new challenges they faced.

The photographs taken between 1940 and 1980, whether in Bamako, Kinshasa or Lagos, were generally made to mark important moments in the lives of their subjects, such as births, deaths, marriages, jubilees, and the attainment of educational diplomas. Identity photographs too represented an essential step in an individual’s biography, as every portrait used in an administrative document denoted an important moment: competitive examinations to gain a professional post, recruitment into the army, or the application for a passport, the symbol of the freedom to leave and return to one’s country without constraint