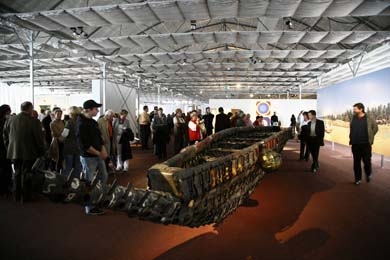 Documenta 12 is concerned with both historical lines of development in art and unexpected concurrences.” In order to bring these “unexpected concurrences” to light, relationships were established between works of art from different decades and cultures in which similar formal patterns have emerged—a process that has led to a “migration” of aesthetic forms across temporal and cultural boundaries culminating in the art of our postmodern world. This formalism was emphasized in the Neue Galerie by walls painted different colors. In turn, this focus on the phenomenon of migration resulted in the selection of a high percentage of artists from Africa, Asia, and Eastern Europe. New to the program was the inclusion of old art, from fourteenthcentury Persian miniatures to global art from recent decades. Artists already long since recognized in their own homelands, such as Nasreen Mohamedi, for example, were not the only ones presented to a broad public in Germany for the first time. The works of several exemplary artists—John McCracken, Kerry James Marshall, Charlotte Poseneske, and Gerwald Rockenschaub—also migrated through all exhibition venues.