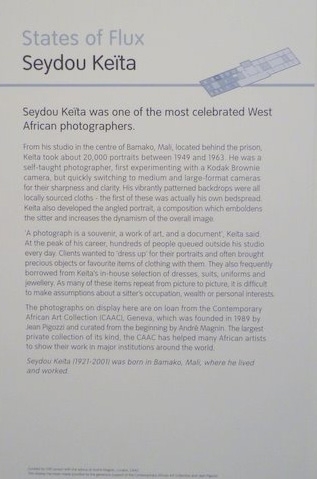 A new display of photographs by Seydou Keïta will go on show at Tate Modern as part of the annual refresh of UBS Openings: Tate Modern Collection. The display, which features fifty vintage and modern photographs by one of the most well-renowned West African photographers, opens on 12 April.

Born in 1921 in Bamako, Mali (then French Sudan, d.2001), Keïta taught himself to use a camera as a teenager, and gradually honed his practice and established a word of mouth reputation, until becoming Mali’s official government photographer in 1962. Keïta’s photographs first came to the attention of the Western artworld in the early-nineties and have since been exhibited with great enthusiasm in international galleries and museums around the world.

The majority of Keïta’s portraits were taken in his life-long studio, setup in 1948, famously behind the Bamako prison. Clients travelled from all over the surrounding areas, sometimes hundreds a day, to queue up to have their photographs taken. Keïta used a medium or large format camera and placed his sitter against what became his signature patterned cloth backdrops -- first using his bedspread and thereafter locally produced materials. Keïta also developed the angled portrait, a composition that both energised the look of the sitter and contributed to his signature style.

Part of Keïta’s career overlaps with younger Malian photographer, Malick Sidibé, who went outside of the studio to document everyday life in and around Bamako. Keïta’s work has also been a touchstone for a younger generation of photographers, such as Samuel Fosso, for whom the ideas of identity and masquerade are central themes in his portrait-based work.

The photographs are seen in the context the ‘States of Flux’ suite on Level 5, which presents works by modern and contemporary artists who moved away from traditional picture-making towards a dynamic and forceful visual language to engage with modern life. The techniques of montage and appropriation as well as the critical engagement with politics and society run throughout the suite. Public programmes related to the Seydou Keïta display include films and performances during UBS  Openings: The  Long Weekend, 23-26 May 2008, and a symposium on West African photography planned for October to coincide with Black History Month.

The photographs are on loan from the Contemporary African Art Collection (CAAC), Geneva, which was founded in 1989 by Jean Pigozzi and curated from the outset by André Magnin. It is the largest collection of its kind and has helped many African artists to show their work in major institutions around the world. As part of Tate Modern’s commitment to showing international Modern and Contemporary art, including art from regions of the world beyond Europe and America, Seydou Keïta is the second collection display at Tate to focus on key and influential artists from Africa.

This display has been made possible by the generous support of the Contemporary African Art Collection and Jean Pigozzi. It is curated by Cliff Lauson, Curatorial Assistant, Tate Modern, in collaboration with André Magnin, Curator, CAAC.