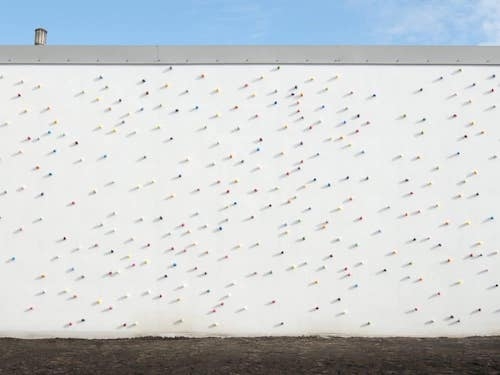 Born in Cameroon and based in Ghent, Belgium, Pascale Marthine Tayou brings his itinerant practice to Miami Beach for his exhibition, Beautiful, creating an organic and collaboratively formed presentation of work made in the last decade. Visitors will navigate between stacked arabic pots, Colonnes Pascale (2012), and encounter Tayou’s colorful Fresque de Craies (2015), constructed of hundreds of chalk pieces arranged beneath West African colon tourist figures, gold foil, and plastic eggs. Tayou, whose practice spans media and subject matter, is an alchemist of sorts. His work fluidly transforms and recasts the viewer’s understanding of materials, objects, and narratives. Mediating between cultures, while setting man and nature in ambivalent relation to each other, his works are created in the knowledge that they are products of social, cultural, or political constructions. Tayou’s work is deliberately mobile and heterogeneous, elusive of pre-established schema.

Beautiful also includes an intervention with the museum’s permanent collection where Tayou presents his work alongside his own selection of objects from The Bass’ founding collection. The dialogue between contemporary artworks and objects from the past speak to his overall practice and material considerations for incorporating objects encountered by chance or from his immediate surroundings into the installation. Further, Tayou’s concern for the decolonization of histories and territories aligns with the international and transient nature of Miami Beach and the impact tourism continues to have in shaping the city. A newly commissioned, site-specific work by Tayou called Welcome Wall (2017), composed of animated LED signs that read “welcome” in over 70 languages, broadcasts a message of profound inclusion from the lobby of the museum.