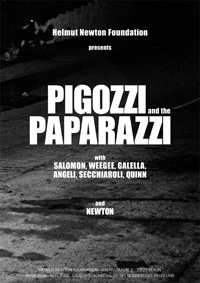 presenting approximately 350 b/w and colour prints by salomon, weegee, galella, quinn, angeli, secchiaroli, pigozzi and newton, the exhibition presents the forerunners and central figures of the “classic” period of paparrazi photography—and provides a visual commentary about the evolution of this phenomenon. the exhibition offers an overview and critical look at the history of a photographic genre dedicated to fame and sensationalism. a genre that continues to feed the yellow press with exclusive reports on the comings and goings of the jet set in order to push the sales of their publications ever higher.

there will always be paparazzi photographs that cross over into celebrity and portrait photography. jean pigozzi, the photographer included in the exhibition title, has been able to cultivate the kind of intensive and intimate relationship with the rich and the famous that is so desperately sought after by the paparazzi at large. being befriended with many famous people in the international social and cultural scene, he has been making candid portraits of prominent individuals at private locations since the 1970’s. an unusual aspect of his work is his double portrait series pigozzi & co. in this ongoing project he appears together with a musician or an actor friend, the two posed with their heads, often touching, in a close-cropped composition. these are images from daily life, in which pigozzi poses as friend and fan. in this manner he subtly takes the hunger for celebrity images to an absurd extreme and in doing so he ingeniously plays to this desire when he publishes the images in books, or exhibits them, as he does here at the hnf.

with ´pigozzi and the paparazzi´, the helmut newton foundation (hnf) invites you to review these varied aspects of paparazzi photography. in the spirit of helmut newton, this latest hnf exhibition covers another controversial theme, and in doing so, intends to build upon the recent success of ´men, war & peace´ and ´wanted´. the exhibition runs from june 20th until november 16th, 2008