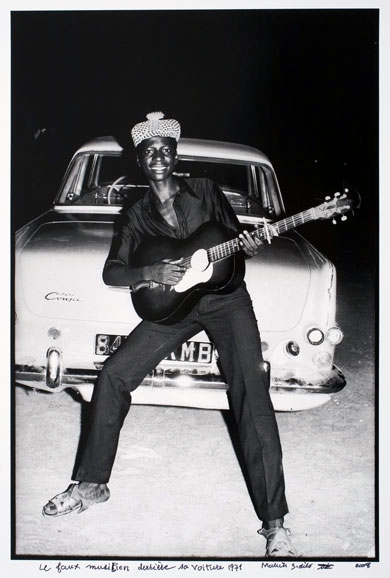 Jack Shainman Gallery is pleased to announce Malick Sidibé’s sixth solo exhibition at the gallery, which chronicles this living master's iconic career, beginning in 1950s Bamako, Mali, where he still lives and works. Many of this diverse selection of vintage and contemporary black-and-white prints have never before been exhibited, yet solidify Sidibé's lasting influence in today's art world. Street scenes and studio shots, while formally distinct from each other, all capture a pervasive sense of freedom and identity amongst youth in postcolonial Mali and continue to speak to a shared spirit of modernity and diaspora.


While internationally acclaimed for his formal portrait studio and candid shots of exuberant parties and nightclubs, Malick Sidibé presents lesser known works to provide context for the depth of the artist’s diverse practice. Street scenes and images like Horloger dans son Atelier (1963/2008) and Le Technicien de Radio Mali (1966/2008) capture everyday Malians at their jobs with the same intensity of the iconic studio work, while featuring subjects comfortably in their element.