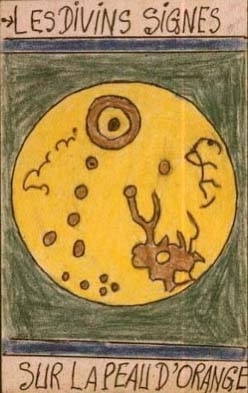 Tate Modern is currently showing a selection of Frédéric Bruly Bouabré's drawings from the CAAC collection. These exhibits will be shown for one year, in one room (room 4), on level 3, in the "Poetry and Dream" section.

Bouabré was born in the village of Zéprégüé, Côte d’Ivoire, in 1923, and worked as a civil servant for the French colonial authorities, later the Republic of Ivory Coast. His life was transformed on 11th March, 1948, when he had a transcendental experience: “From the moment when the heavens opened to my eyes and seven coloured suns drew a circle of beauty around their mother sun, I became Cheik Nadro, the man who never forgets…” This inability or refusal to forget anything has informed his artistic practice ever since, and his work reflects a need to catalogue objects, people, places, images, messages and even sounds, all using the same ballpoint pen/coloured pencil, postcard-sized format. It could appear obsessive, but there is something both enchanting and calming about Bouabré’s methodical yet utterly eccentric approach. As an artist, poet, philosopher and folklorist, he explores his immediate surroundings and the wider world with seemingly inexhaustible curiosity and often wry humour, offering up his findings as he goes along.

These days the artist lives and works in Abidjan, the fourth largest French-speaking city in the world, but most of his work has found its way out of Côte d’Ivoire and into the Geneva-based private collection of Italian businessman Jean Pigozzi. Bouabré’s rise to international fame came largely thanks to his inclusion in the high-profile 1989 show Magiciens de la Terre at the Pompidou Centre in Paris, which sparked solo and group exhibitions around the world for many of the featured artists.