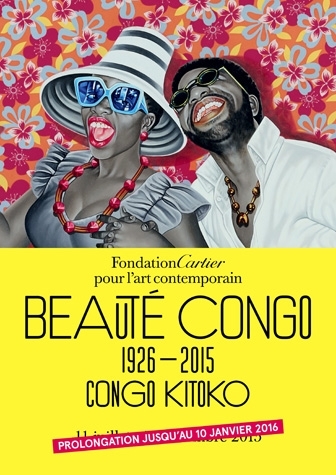 A place of extraordinary cultural vitality, the Democratic Republic of the Congo will be honored in the exhibition Beauté Congo – 1926-2015 – Congo Kitoko presented at the Fondation Cartier pour l’art contemporain with André Magnin, Chief Curator.

Precursors
As early as the mid-1920s, when the Congo was still a Belgian colony, precursors such as Albert and Antoinette Lubaki and Djilatendo painted the first known Congolese works on paper, anticipating the development of modern and contemporary art. Figurative or geometric in style, their works represent village life, the natural world, dreams and legends with great poetry and imagination. Following World War II, the French painter Pierre Romain-Desfossés moved to the Congo and founded an art workshop called the Atelier du Hangar. In this workshop, active until the death of Desfossés in 1954, painters such as Bela Sara, Mwenze Kibwanga and
Pili Pili Mulongoy learned to freely exercize their imaginations, creating colorful and enchanting works in their own highly inventive and distinctive styles.

Popular painters
Twenty years later, the exhibition Art Partout, presented in Kinshasa in 1978, revealed to the public the painters Chéri Samba, Chéri Chérin, and Moke and other artists, many of whom are still active today. Fascinated by their urban environment and collective memory, they would call themselves “popular painters.” They developed a new approach to figurative painting, inspired by daily, political or social events that were easily recognizable by their fellow citizens. Papa Mfumu’eto, known for his independent prolific comic book production and distribution throughout Kinshasa in the 1990s, also explored daily life and common struggles throughout his work. Today younger artists like J.-P. Mika and Monsengo Shula, tuned-in to current events on a global scale, carry on the approach of their elders.