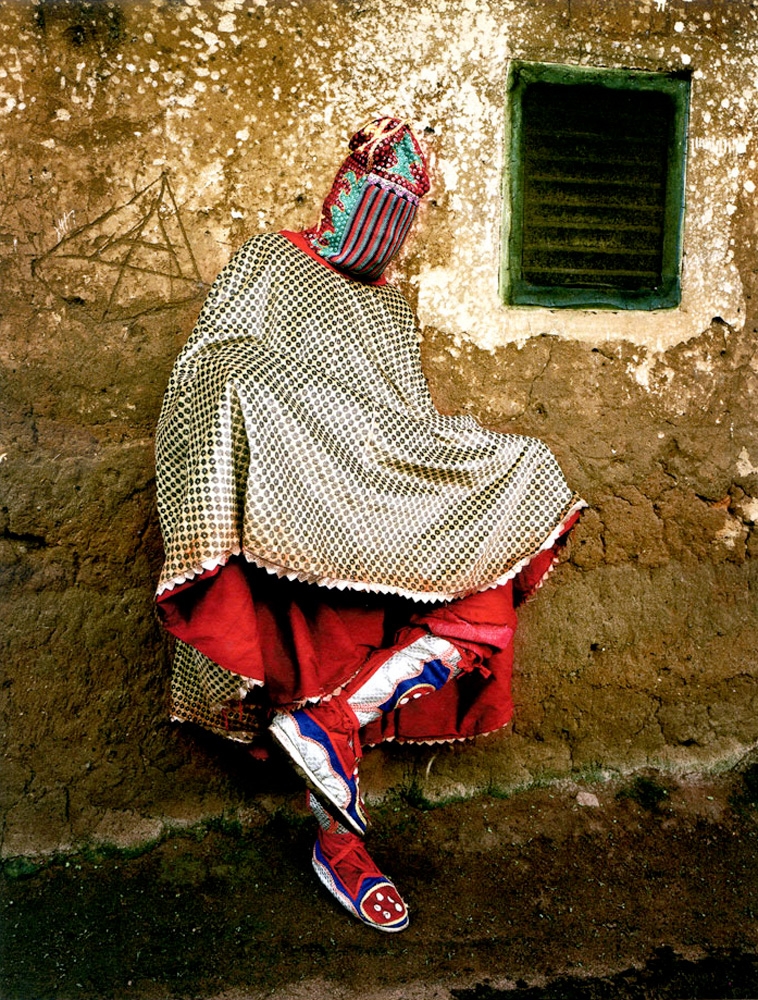 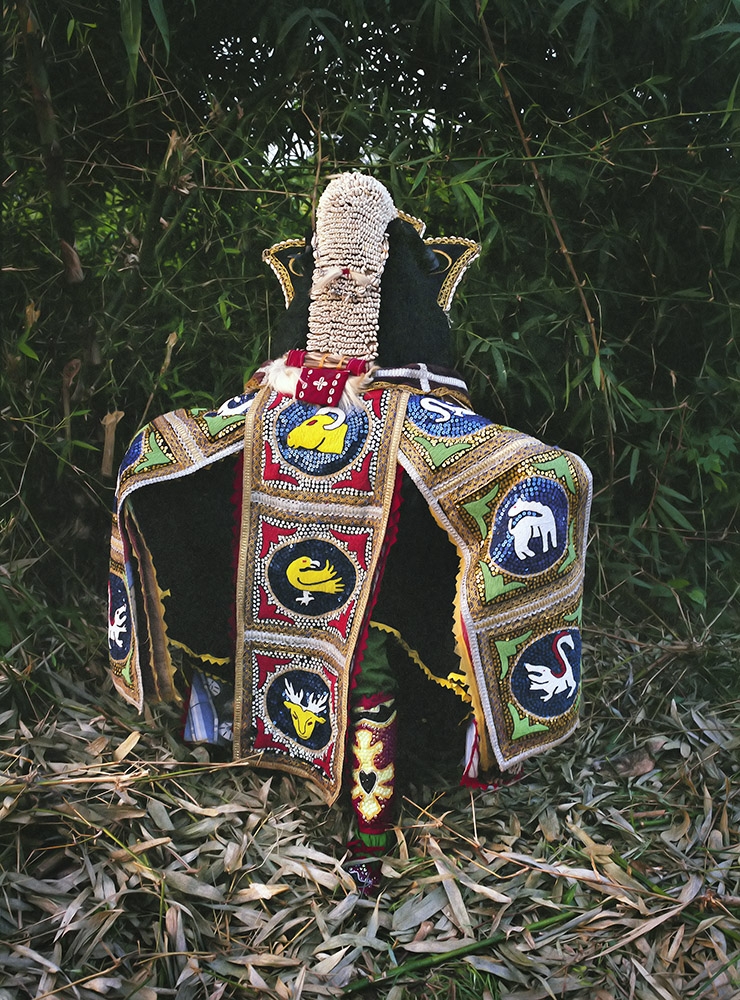 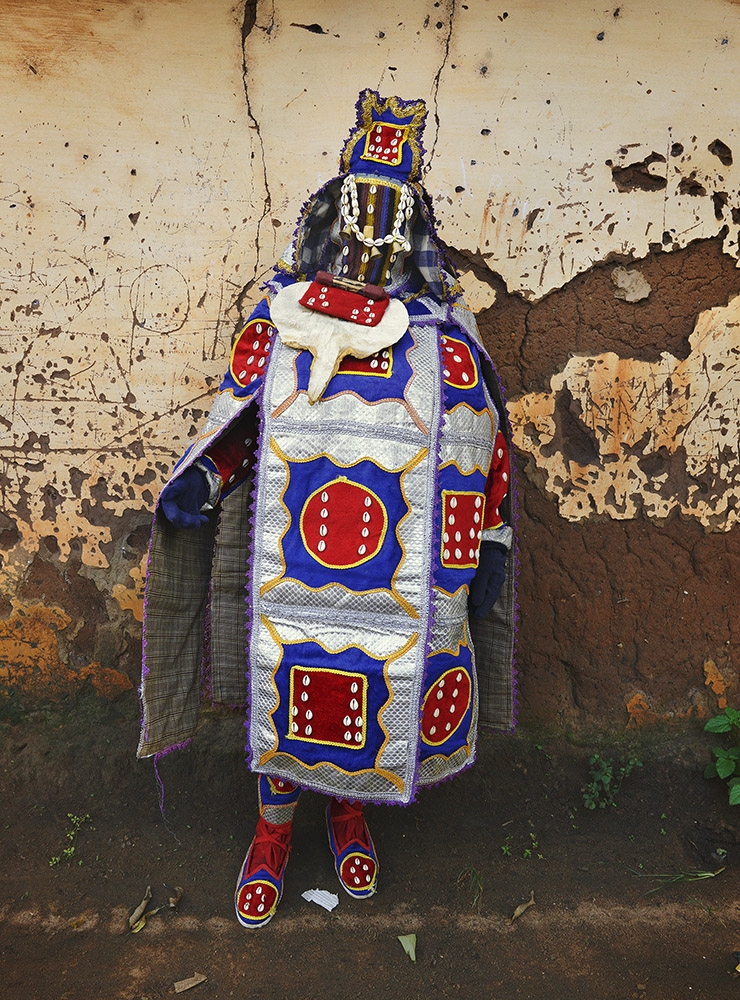 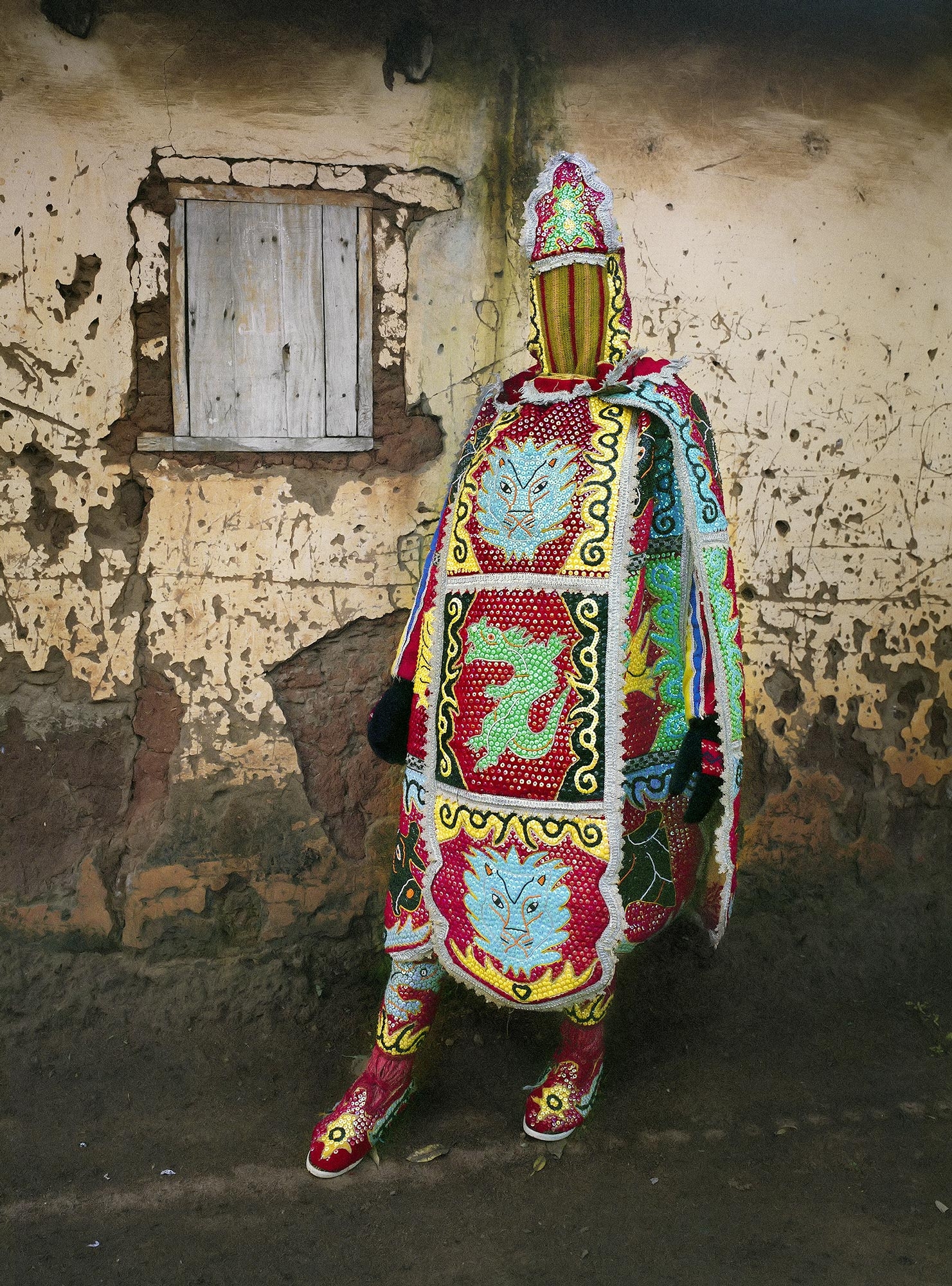 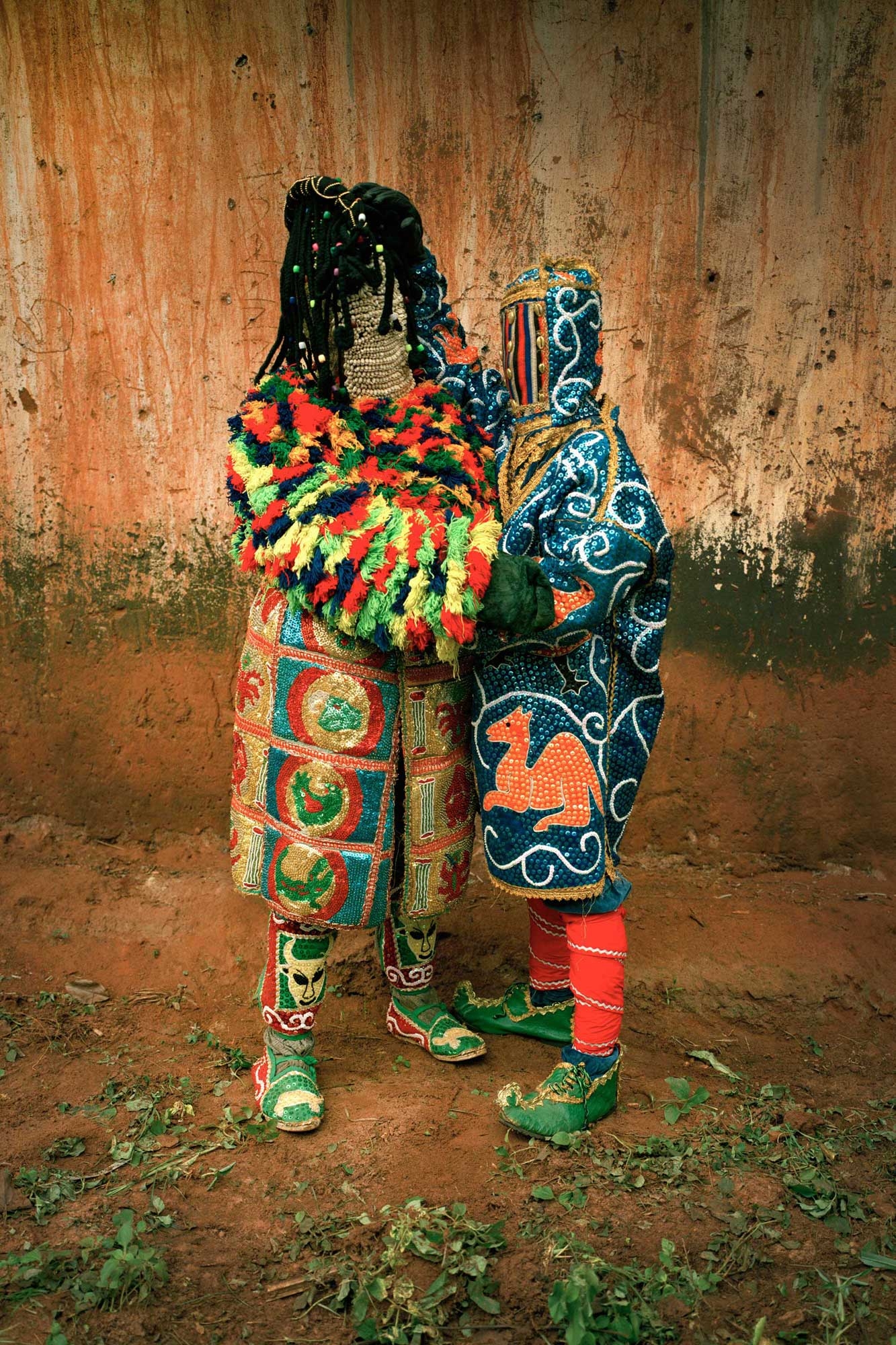 95 x 67 cm
C-Print
One ceremonial robe with feathered sleeves,
the other with camel motif. 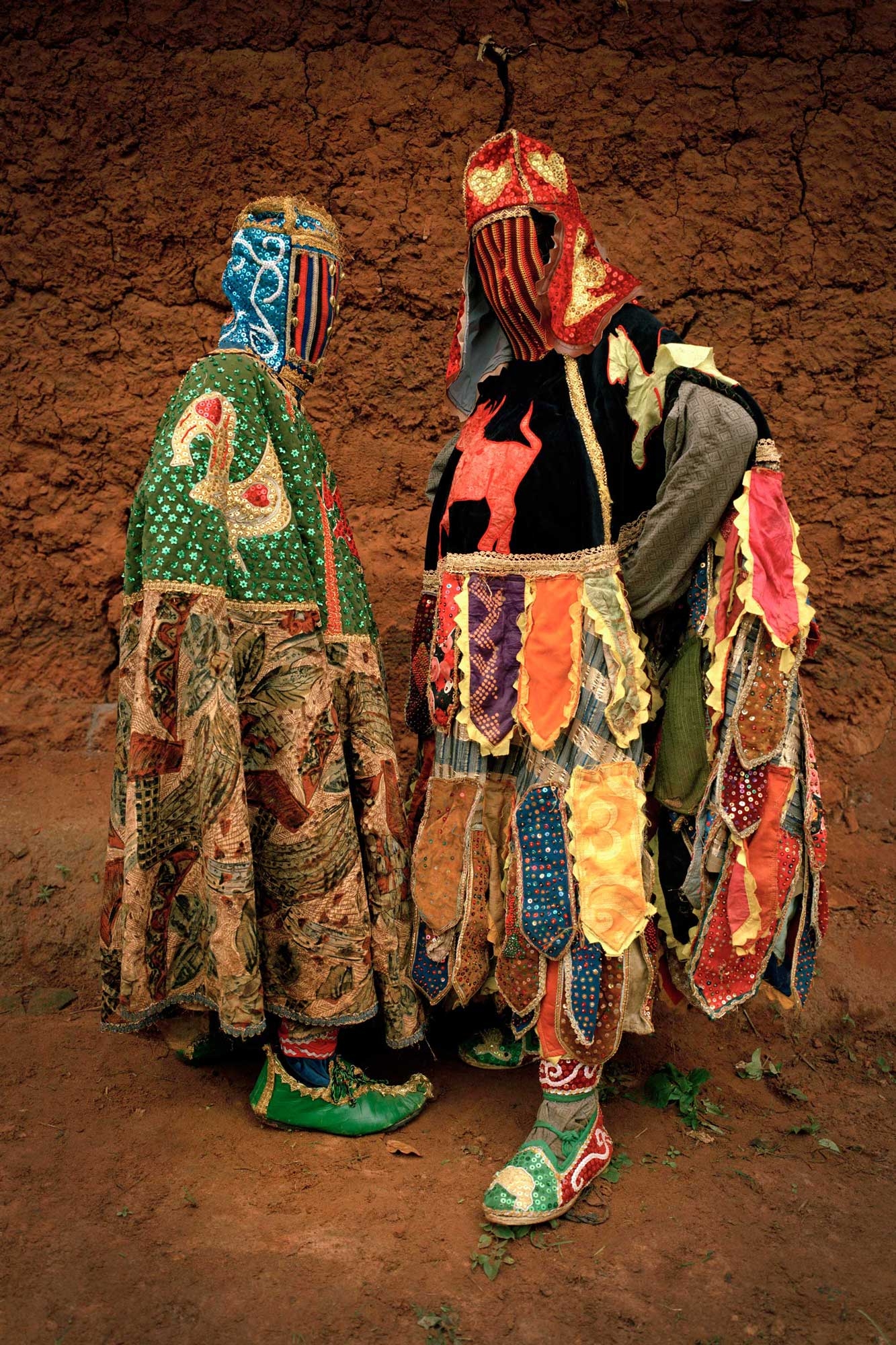 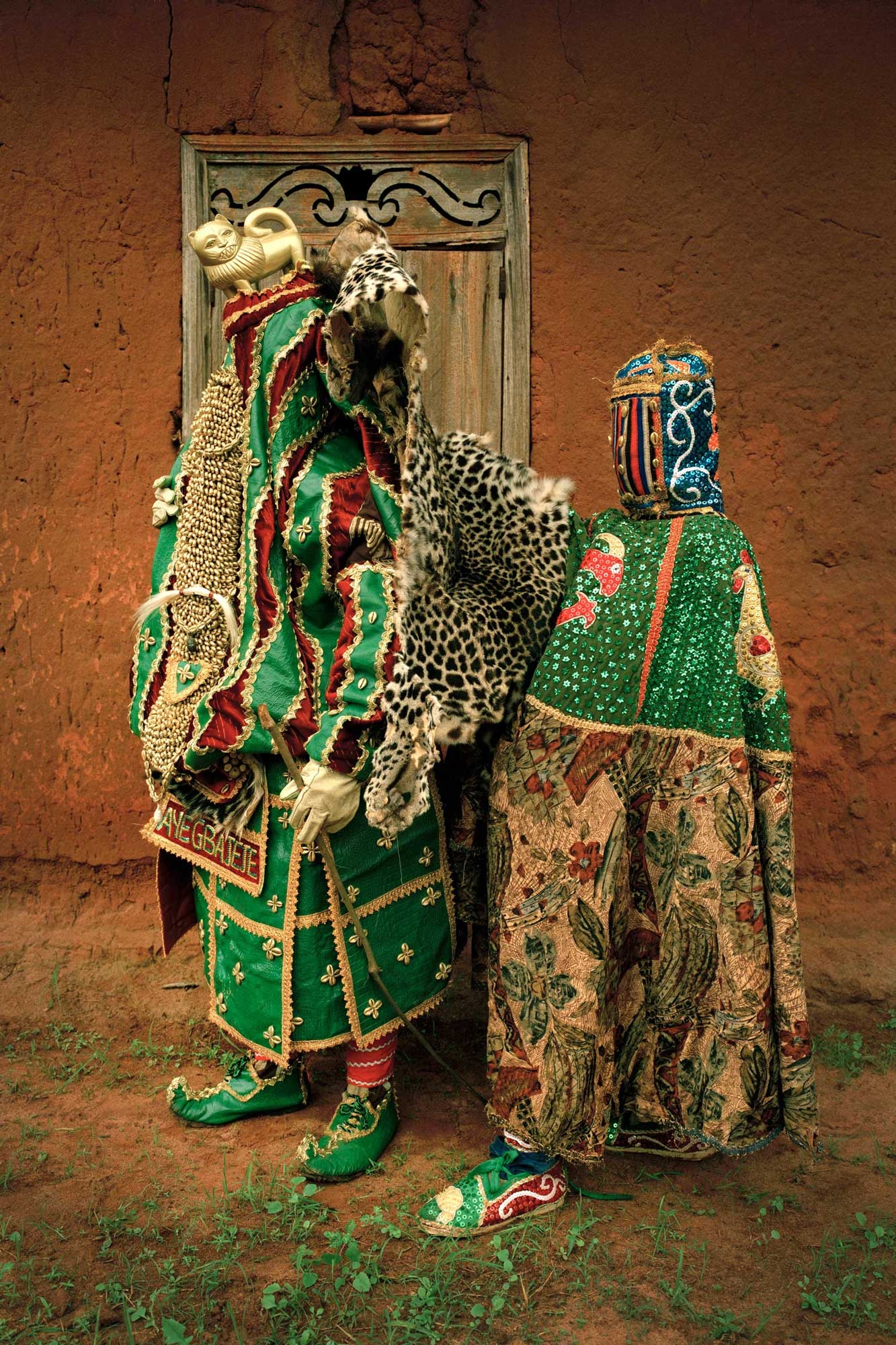 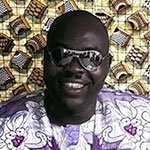 Leonce Raphael Agbodjelou was born in 1965 in Porto-Novo, Benin where he continues to live and work.

Agbodjelou is one of the pre-eminent photographers of the Republic of Benin, based in the capital Porto Novo. Trained by his father, the world-renowned photographer Joseph Moise Agbodjelou (1912-2000), he has since developed his own individual style in contemporary and innovative ways.

Agbodjelou’s photographs of the people of Porto-Novo, Benin (formerly Republic of Dahomey) are drawn from street life, his friends, family and studio customers. In Leonce’s impressive portraits, wild combinations of locally designed Dutch imported textiles create extreme gradations between background, foreground, person and clothing. Leonce is part of a generation experiencing rapid change and his photographs capture the energy and unfettered zest for life of a people caught between tradition and progress.

In his Vodou series, Agbodjelou, refers to Yoruba funerals, about 150 years ago, when masqueraders began to appear to guide the passage of the deceased to the spirit world. Much has changed for the Yoruba and their spiritual guides, in today’s Republic of Benin, and their costumes have absorbed a host of influences over the centuries, but Agbodjelou’s clever strategy of placing his subjects against mud brick walls conveys this sense of an essentially unaltered time.

Leonce is the founder and director of the first photographic school in Benin and has recently been appointed president of the Photographer's Association of Porto-Novo. His work has been acquired by the Carnegie Museum of Art, Pittsburgh, and Pitt Rivers Museum, Oxford, among others.

Betwixt and Between: Contemporary African Photography, Museum of Glasgow

Out of Focus, Saatchi Gallery, London